Sport: Sports are one of the 4 Heroic Games of the Fae. These include Elf Shot [Archery], Swordsmanship (Boffer), Munitions (NERF) and Wand Dueling (magic wands).  There are many forms of competitive skills and they all increase martial prowess, hand-eye-coordination, speed and accuracy and general physical fitness.

The Fae are renowned for their skill with the bows, crossbows or sling shots.  Do you think you can bulls-eye the target and become the Kingdom’s best archer??

FUN HISTORICAL FACTS! In Old World folklore, Elfshot or elf–shot is believed to be caused by invisible elves 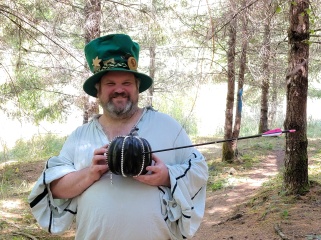 shooting invisible arrows at a person or animal, causing sudden shooting pains localised to a particular area of the body. The prevention or curing of elfshot comes from using a charm against the sudden stitch; the three plants used in the cure are  feverfew, red nettles and waybread. All have vaguely spear-shaped leaves, which may have suggested their use as a remedy for pains attributed to elf-arrows.