Faeries are divided into two traditional Courts: Seelie and Unseelie.  The Seelie rule over the light half of the year from Beltane (May 1) to Samhain (Oct 31).  During this time, their magic is at its height.  The Seelie fae have great respect for order, honour, tradition.  They tend to me more helpful to humans, and return favors in kind.

As with all Fae, Oaths are a solemn and binding matter, thus they take their word and their promises very seriously.  Like all Fae however, though they may be bound by the letter of the law, they do have a love for word play and bending.

The Sidhe (pronounced ‘shee’) are the fae nobility from Celtic history. They are known to be tall and slender, with pointed ears.

King Finvarra, High King of the Sidhe.  Finvarra hails from Knockmaa Hill, near Tuam, in the Olde World of Éire, where he lives with his Queen.  High King Finvarra is a benevolent figure who ensures good harvests, a master at chess, strong horses, and great riches to those who will assist him.

:**:Fairy Princess Lolly:**: is a Sidhe of the New World. She resides in the Duchy of Cascadia, Kingdom of Storms. This corresponds approximately to the Pacific Northwest (WA, OR, ID) on a human map.

Her favorite pastimes are playing music, reading and writing.  Princess Lolly loves a good game and the bardic competition is her favorite. Rumor has it she loves shiny things and has been known to tie sparkly strands of fairy hair into human hair in the prettiest knots they’ve ever had in their hair. 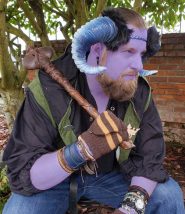 Jarl Hammerhands the Troll: A Mountain Troll who has descended the rocky crags to help his fellow fae in the human world.  Gunther has risen through the ranks to become one of the Gentry with the title of Jarl – or Count. He oversees the Country of Northern Skies which includes the NW part of Washington State. In folklore trolls range from malevolent, to kind protectors, hailing from their homeland called Trollebotn. They have their own brand of magic, language and customs. They are large in size, and live anywhere from under bridges to Mountain fortresses.

Ion the Leprechaun is the resident expert in “human magic”, otherwise known as “science”. In ancient Irish lore, Leprechauns were some of the largest of the Good Folk. Misrepresented by artists, humans mistakenly think of them as very small.

Being an expert in rainbows, he knows just where the gold is hidden – he may even find it behind your ear! He loves experimenting with gizmos and gadgets. It is said that he once flooded the basement with Oobleck.

You have to keep your eye on this Leprechaun, otherwise he’s likely to disappear! 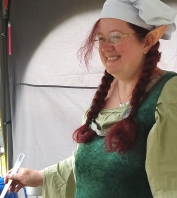 Famous Dana the Boggan: Boggans (aka Brownies) are typically understood as household or farmstead dwellers. Renowned for their ability to help around the house with cleaning, cooking, repairs, and animal care, they are known for their industriousness. They like to work while no one is looking, and they will become offended if you try to pay them. Just leave out a bowl of milk and honey and this will ensure that your Boggan, does not turn in to a bogart and start messing things up and losing your keys! 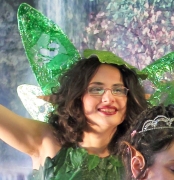 Leaflock is a fairy hand maiden. She is a young, New World Piskie, tropical forest fairy who travels with the court. Children especially love to give her hugs and touch her fairy wings to see what they feel like. Her small stature makes it easy for her to flit around “pixie pinching” unsuspecting humans but never fear! This is just her way of leading mortals to where they can use their clothes-pin “pinch” to clip a dream to the dream tree. 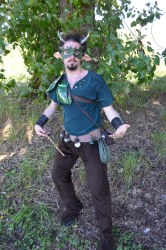 Ruun Hidae is an avid collector of trinkets and bobbles. This satyr is very much an adventurer at heart. He loves traveling to new exciting places and discovering fascinating new treasures with a particular fondness for magical talismans. He’s fallen out of practice with most of his magic in his travels but has been known to sing a bawdy song from time to time. His favorite things are the daily distractions of good friends, good drink and good times.